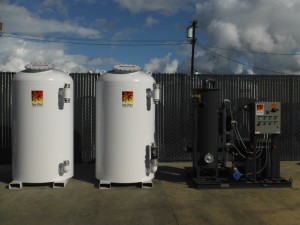 Soil vapor extraction (SVE) is an in situ remedial technology that reduces concentrations of VOC’s adsorbed to soils in the unsaturated (vadose) zone. In this technology, a vacuum is applied through wells near the source of contamination in the soil. Volatile constituents of the contaminant mass “evaporate” and the vapors are drawn toward the extraction wells. Extracted vapor is then treated with carbon adsorption before being released to the atmosphere. The increased air flow through the subsurface can also stimulate biodegradation of some of the contaminants, especially those that are less volatile. Wells may be either vertical or horizontal.

In this technology, a vacuum is applied to the contaminated soil matrix through extraction wells which creates a negative pressure gradient that causes movement of vapors toward these wells. Volatile constituents in the vapor phase are readily removed from the subsurface through the extraction wells. The extracted vapors are then pushed or pulled through activated carbon and discharged to the atmosphere.

Pilot studies are an extremely important part of the design phase. Data provided by pilot studies is necessary to properly design the full-scale SVE system. Pilot studies also provide information on the concentration of volatile organic compounds (VOCs) that are likely to be extracted during the early stages of operation of the SVE system.

A pilot test is recommended for evaluating SVE effectiveness and design parameters for any site, especially where SVE is expected to be only marginally to moderately effective. Pilot studies typically include short-term (1 to 30 days) extraction of soil vapors from a single extraction well, which may be an existing monitoring well at the site. Different extraction rates and wellhead vacuums are applied to the extraction wells to determine the optimal operating conditions.

During the Pilot Test, Radius of Influence (ROI) is the most important parameter to be considered in the design of an SVE system. The ROI is defined as the greatest distance from an extraction well at which a sufficient vacuum and vapor flow can be induced to adequately enhance volatilization and extraction of the contaminants in the soil. Extraction wells should be placed so that the overlap in their radii of influence completely covers the area of contamination.

SVE (Soil Vapor Extraction) Systems main components consist of a Knockout Tank for water/moisture removal, Low Vacuum or High Vacuum Blower, Motor and Control Panel. Pure Effect’s rental systems typically have these components as well as various safety sensors, silencers and an auto drain. Pure Effect can perform Pilot tests with these systems. We have Various Locations Permits for the South Coast AQMD. Pure Effect can manufacturer an SVE System to your specifications as well.